The latest version of WinStars focuses on comets and asteroids and represents them as faithfully as possible.

To do this, WinStars 3 queries the 3d-asteroids.space database when the user approaches one of these objects and retrieves the corresponding 3D model if one is available.

Orbiting the Sun, comets and asteroids give us precious information on the components of the planets. Probably having evolved little since their formation 4.6 billion years ago, they appear as remnants of the primordial nebula that formed our solar system. For this reason, these small celestial bodies have attracted the attention of scientists who have developed various techniques for learning more about their physical characteristics (shape, configuration, surface, geology, rotation period, etc.). Some interplanetary missions have, of course, allowed us to approach them (Galileo, NEAR Shoemaker, Dawn or Rosetta), but these missions are far too complex and costly to consider exploring the 390,000 asteroids that have been recorded to date.

Therefore, when one of these objects is located less than two million kilometres from the Earth, it is sometimes possible to use powerful radio telescopes to image its surface and determine its size, morphology, rotation speed and to determine whether or not if it is accompanied by one or more small satellites.

Thus, asteroid 2021 PJ1 was observed on 14 August 2021 with the Deep Space Network’s 70-metre antenna in Barstow, California. And it is with the Arecibo radio telescope that most of the radar imaging studies have been conducted to reach a catalogue of a thousand objects today.

But it is the photometric method of light curves that is most widely used. Asteroids have such small diameters (< 1000 km) that it is impossible to resolve them optically with the largest terrestrial telescopes. However, by observing the variations in the brightness of an asteroid over a period of ten hours or more, it is possible to mathematically reconstruct the geometry of an object and define its period of rotation. These light curves, which show minima and maxima as well as periods, provide indications of an elongated or spherical shape, surface irregularities, the presence of large craters or existence of a companion. 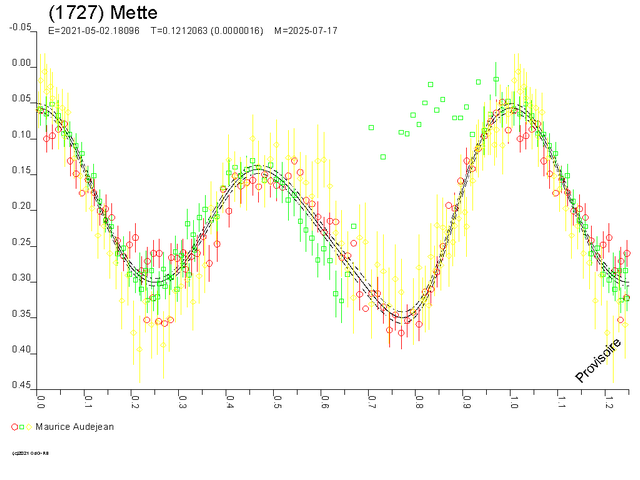 For the time being, only objects with a number < 100 are represented in 3D in the paid version of WinStars 3.