You’re still in containment due to the coronavirus and you don’t know what to do with your days? Test the Android version of WinStars!

I need your help to understand the problems that some users may encounter. So please install the program from Google Play and run it for a few minutes. Then just use the “send a report” function in the main menu to let me collect precious information about this unforgettable experience between your terminal and W3.

If you are very brave, you can also send me your comments and suggestions (what should be changed, added or deleted?). This will help me to propose in the future a version more adapted to the needs of the users.

To reward you for your efforts, five brave beta testers (drawn at random) will receive a free user license to use the full version of WinStars on Windows.

And if you like WinStars and want to support me, please leave a positive comment on the Google Play page of the program.

Thank you for your participation!

The USGS, the United States Geological Survey, has just published the first geological map of the entire surface of the Moon.

Called “Unified Geologic Map of the Moon”, this highly detailed map could be used for future manned lunar missions. It is based on information collected from the Jaxa’s Kaguya (Selene) probe and the Lunar Reconnaissance Orbiter‘s camera. The map also uses data collected during the various Apollo missions. A publication details the methodology that made this possible.

The most important change in this version is the integration of the latest DE438 planetary theory from the Jet Propulsion Laboratory, a research center located in California, whose objective is to prepare automatic exploration missions. The algorithms developed by the scientists model precisely the positions, velocities and accelerations of the main objects of the solar system.

The laboratory proposes files in the form as Chebyshev polynomial coefficients which give with precision the coordinates and speeds but also, more indirectly, quantities such as the orientations of celestial bodies.

The accuracy of the calculations can be tested in WinStars by setting, for example, the date to June 1, 2017 in the solar system mode and by following the Cassini trajectory (Animation function).

The engineers of this mission, which had run out of fuel, chose to precipitate the probe into Saturn’s atmosphere to avoid contamination of one of its satellites by possible staphylococci that could have survived in Cassini for all those years.

But before destroying the probe, it was decided to make 22 dives between the atmosphere and the planet’s rings in a area rich in scientific information.

This release was also an opportunity to review the source code and correct many defects. In the next version, the Android interface will be improved.

Starlink is a project of the american company SpaceX that will provide high-speed Internet connection anywhere on the surface of the globe through a myriad of satellites designed for this purpose.

To reduce latency delays, these small satellites weighing less than 260 kg will be placed on low orbits at an altitude of a few hundred kilometres. At term, these satellites will form a fleet of more than 42,000 objects!

This project is a real disaster for astronomers who fear that their work will be seriously affected by these intruders who could parasitize the regions of the sky observed by scientific instruments. This pollution will not only affect deep-sky pictures but could also affect the radiotelescopes that observe the sky in other regions of the electromagnetic spectrum. The exasperation is growing as professional and amateur astronomers notice the first effects of the incessant passing of satellites in the field of view of the instruments.

But Elon Musk’s company isn’t the only one that wants to use low Earth orbits. OneWeb and Amazon are already working on concurrent projects that will, in a few years, fill the sky with hundreds of thousands of light points impossible to remove.

It will imply the pure and simple transformation of the sky as we know it, making any research in astrophysics impossible from Earth. This is a natural patrimony accessible to all, already well damaged by anarchic peri-urban lighting, which will disappear forever.

Unfortunately, it seems difficult to fight against these huge corporations that decide, in total impunity, to deprive mankind of the spectacle of the night sky. Every month, they obtain authorisation for launching new satellites from organisations such as the International Telecommunication Union or the Federal Communications Commission, using the current legal gap and rules that have become obsolete as a result of this race to space. These  megaconstellations also considerably increase the risk of collisions and could saturate the nearby space with debris of all kinds.

Astronomes can only protest and try to alert public opinion and governments to the dangers of these uncontrollable projects.

To see the extent of the damage, the latest version of WinStars displays the position of the StarLink constellation satellites in real time.

Just go to Solar system objects/satellites menu, use the Update object orbit elements option and select, one by one, all the satellites whose name starts with Starlink. 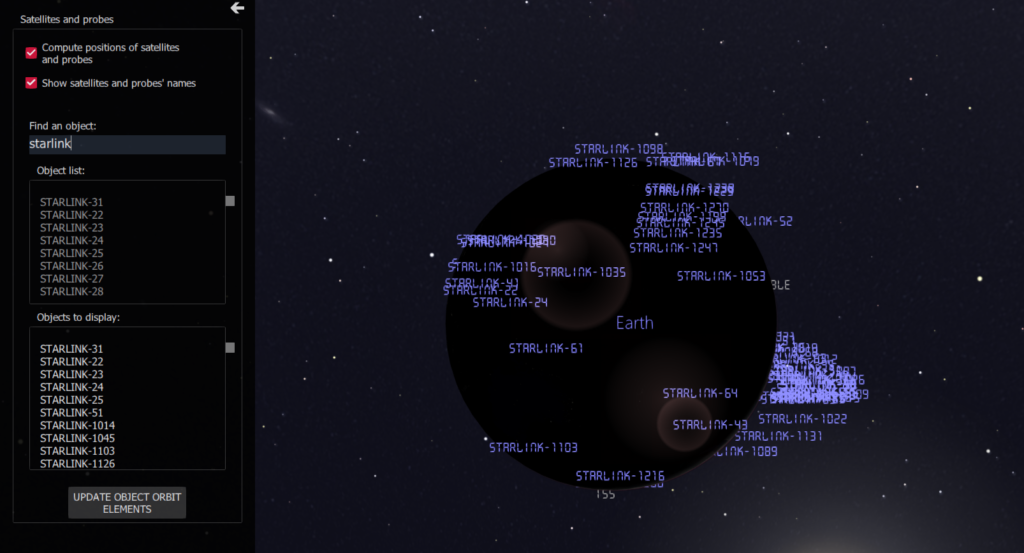 With version 3.0.118, WinStars uses tessellation to improve the rendering of planetary surfaces. This technique, introduced with the OpenGL 4.0 standard, adds a large number of triangles to an object to make its 3D appearance more complex.
Previously, WinStars simulated the relief of a planet by playing with shadows and illusory perspectives. The textures modified by occlusion mapping were then applied on simple geometrical shapes (typically about ten triangles). 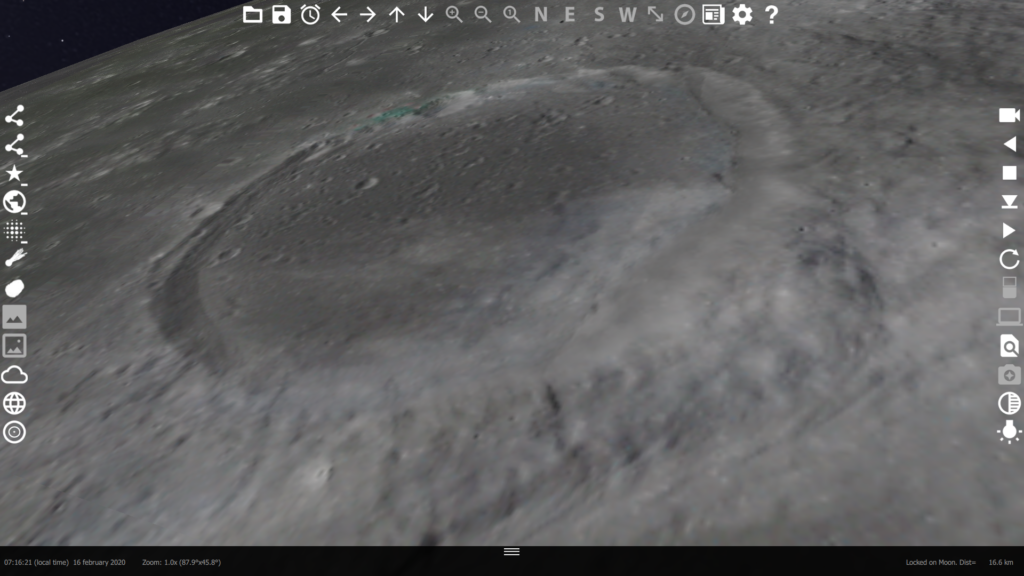 Occlusion mapping technique that plays on shadows and lights to simulate roughness on the surface of an object. 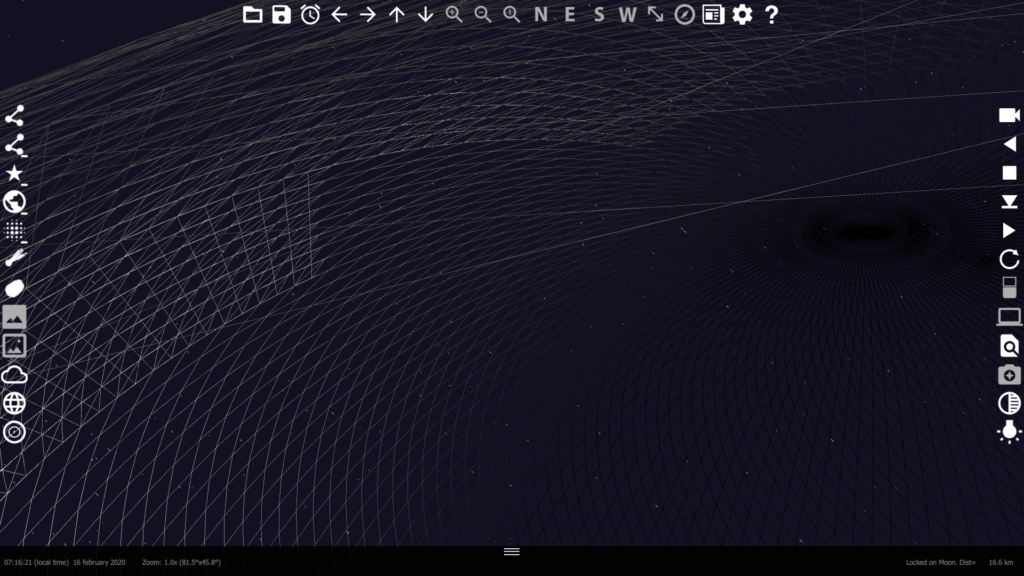 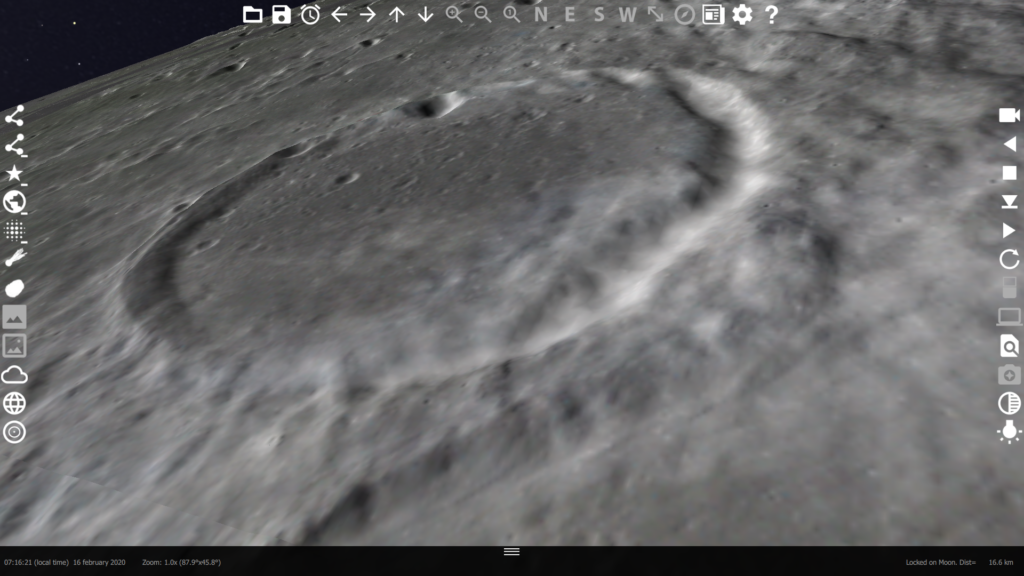 With tessellation, the number of polygons used to represent the details of an object becomes massive. Depressions and bumps are now represented in three dimensions and are no longer simulated. 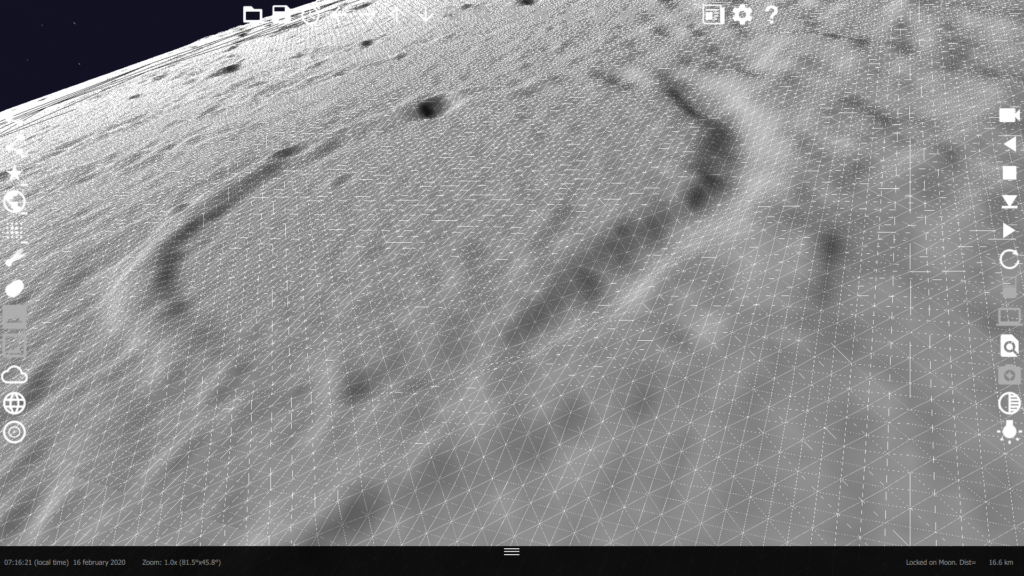 The advantage of tessellation lies in the fact that the addition of these new triangles is done internally by the graphics processor during the rendering phase.
Therefore, there is no bandwidth reduction problem between CPU and GPU during this geometric complexification phase. This technique being very optimized, the impact on the fluidity of the software is limited…

This video from Gamers Nexus explains very well the interest of this technique in the video game industry:

Tessellation is enabled for Mars and the Moon and currently only works with desktop versions (Linux, MacOS and Windows). The rendering of the surface of Mars is not as good as for the Moon, the textures quality being much inferior. I’m looking for better textures to offer a comparable rendering. 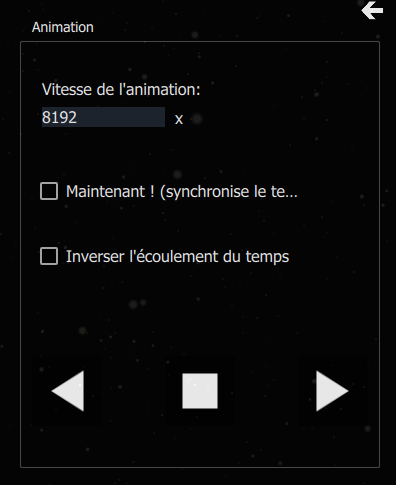 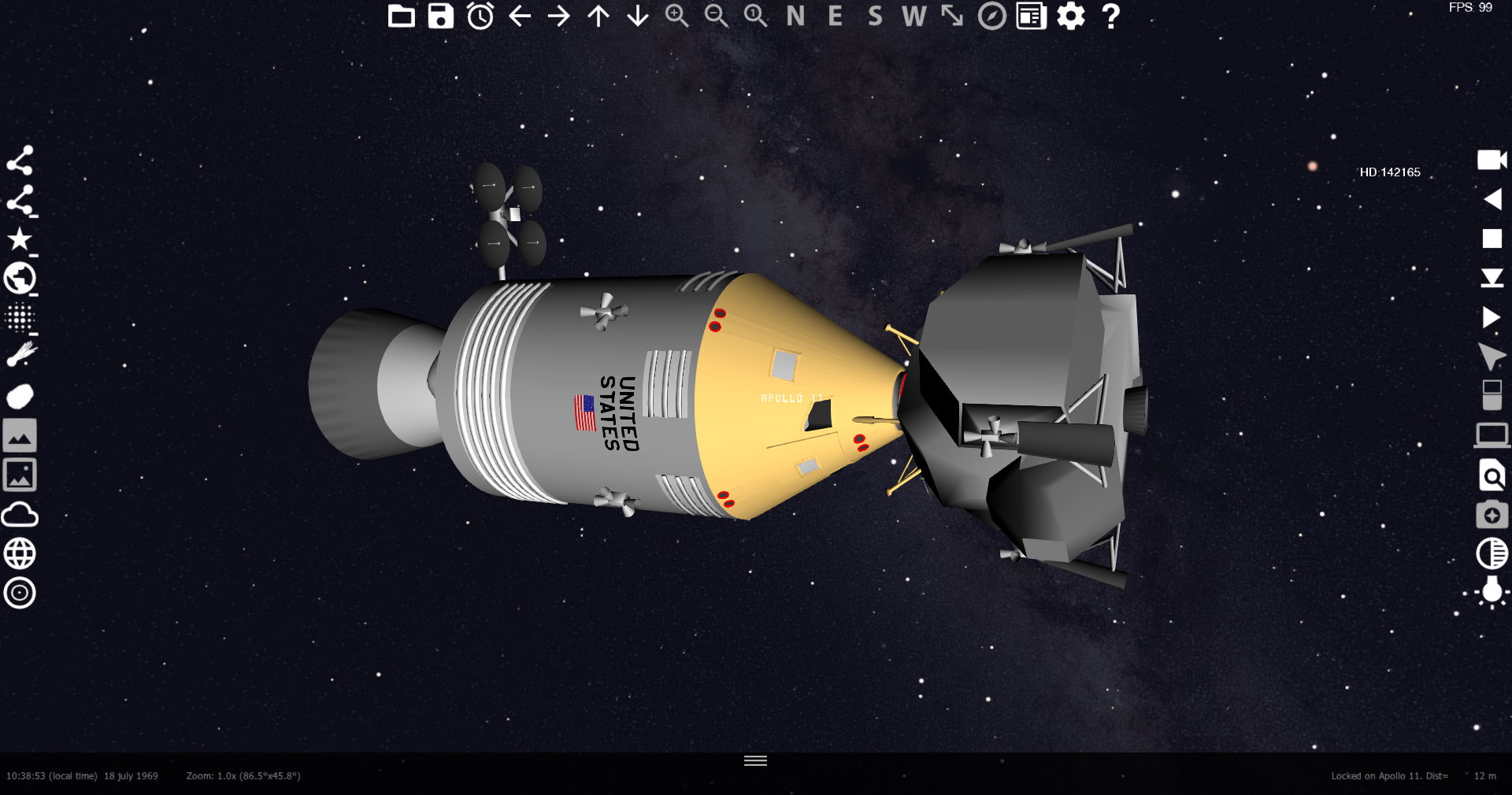 On the occasion of the 50th anniversary of this historic event that captivated the world, the “Apollo 11” module honours the man’s first steps on the Moon.
A 3d model of the LEM and control module is just placed between the Earth and the Moon. No trajectory is calculated. The date is not taken into consideration.

As a coincidence of timing, this new version also offers a Russian translation of the site and software. Thanks to Sergey Telukhin for doing this huge job.

Finally, the Android version contains executables optimized for arm64-v8a and x86 architectures. A specific version for 64-bit x86 processors is in preparation.

It is now possible to monitor, in real time, the position and orientation of the Hubble Space Telescope.

By clicking on the telescope and choosing the “Space telescope live” option, you can also access the instrument’s schedule, the name of the astronomer who initiated the observation and the instrumentation parameters (camera used, filters, field value).

And thank you to the STScl Web Team for responding me so quickly and making available to the public the innumerable benefits of this telescope!

NASA has just published a new map of the sky. It represents what we could see if our eyes were sensitive to x-rays. It was obtained thanks to the NICER instrument (“Neutron Star Interior Composition Explorer”) which has been performing measurements on board the International Space Station since June 2017. 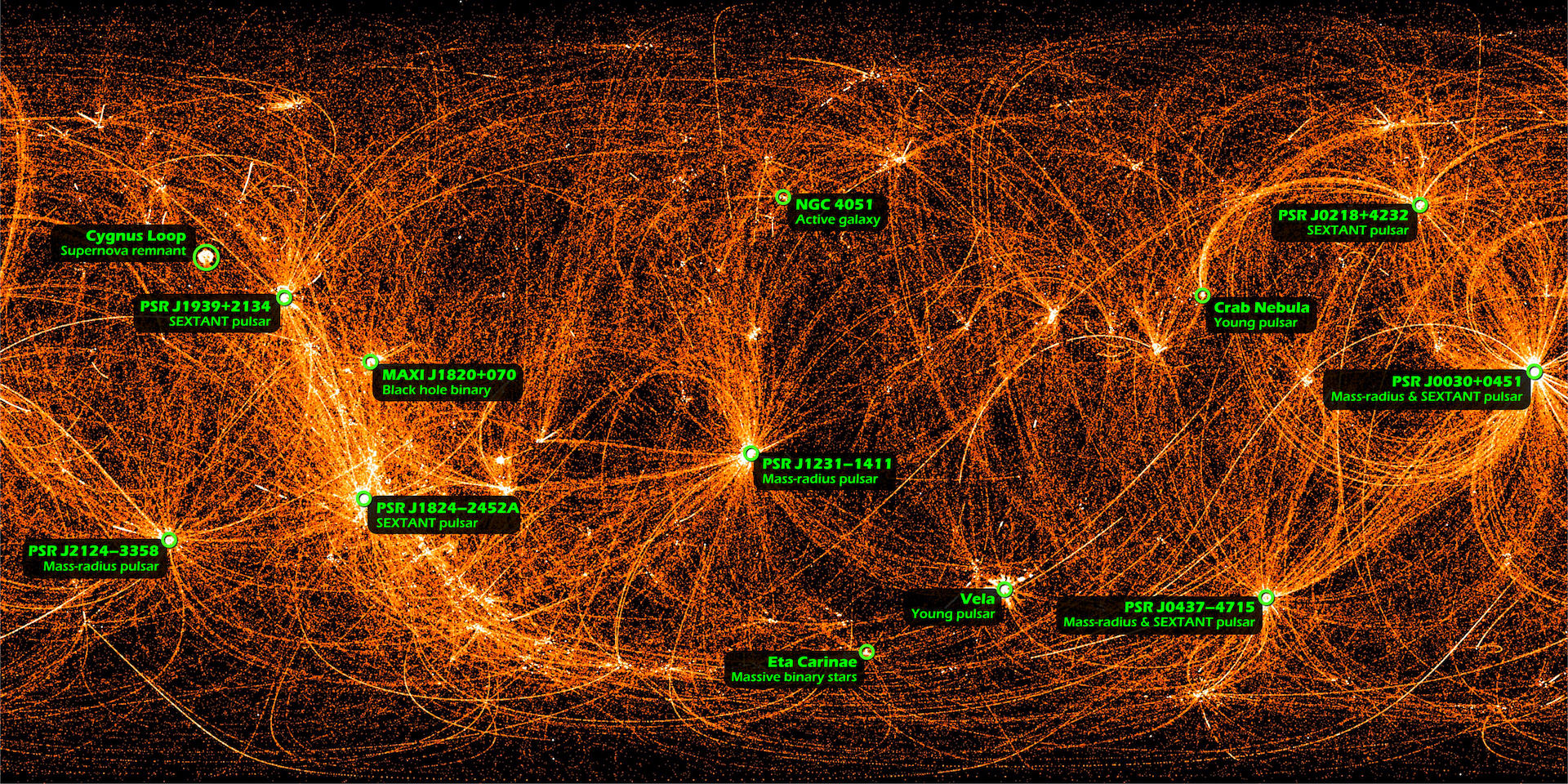 The main mission of Nicer is to learn more about the inside of neutron stars, very compact and dense stars formed after the explosion of an end-of-life star. One of the objectives is to measure their diameter “with an accuracy of 5%”, says NASA.

To carry out these surveys, NICER scans the sky by moving from one target to another. It is these movements that are at the origin of the arcs that are visible on the final image.

A timelapse of NICER aboard the ISS.

If some curves appear brighter than others, it is only because the instrument has made the same path many times between specific targets. The curves intersect on bright points which are powerful sources of X-rays.

Among these sources can be found the Cygnus Loop, a supernova afterglow, or the MAXI J1820+070 source which is suspected to be actually a black hole.

By activating the NICER module in WinStars, you can replace the usual background of the sky with the image that NASA has just published on the mission site (it is also necessary to disable the Brunier module to display the image normally).

The original NASA annotations were deliberately left on the final image. 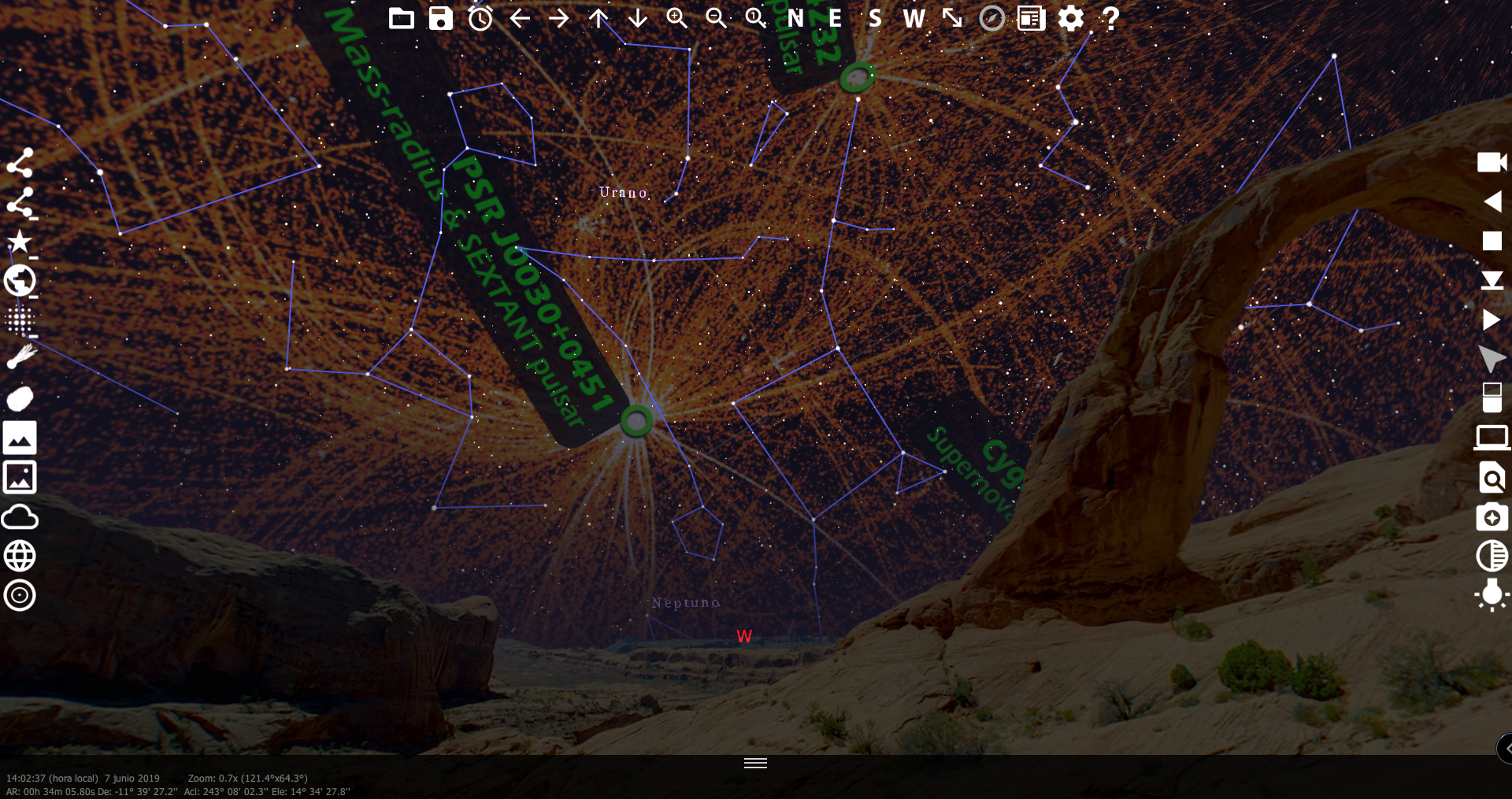 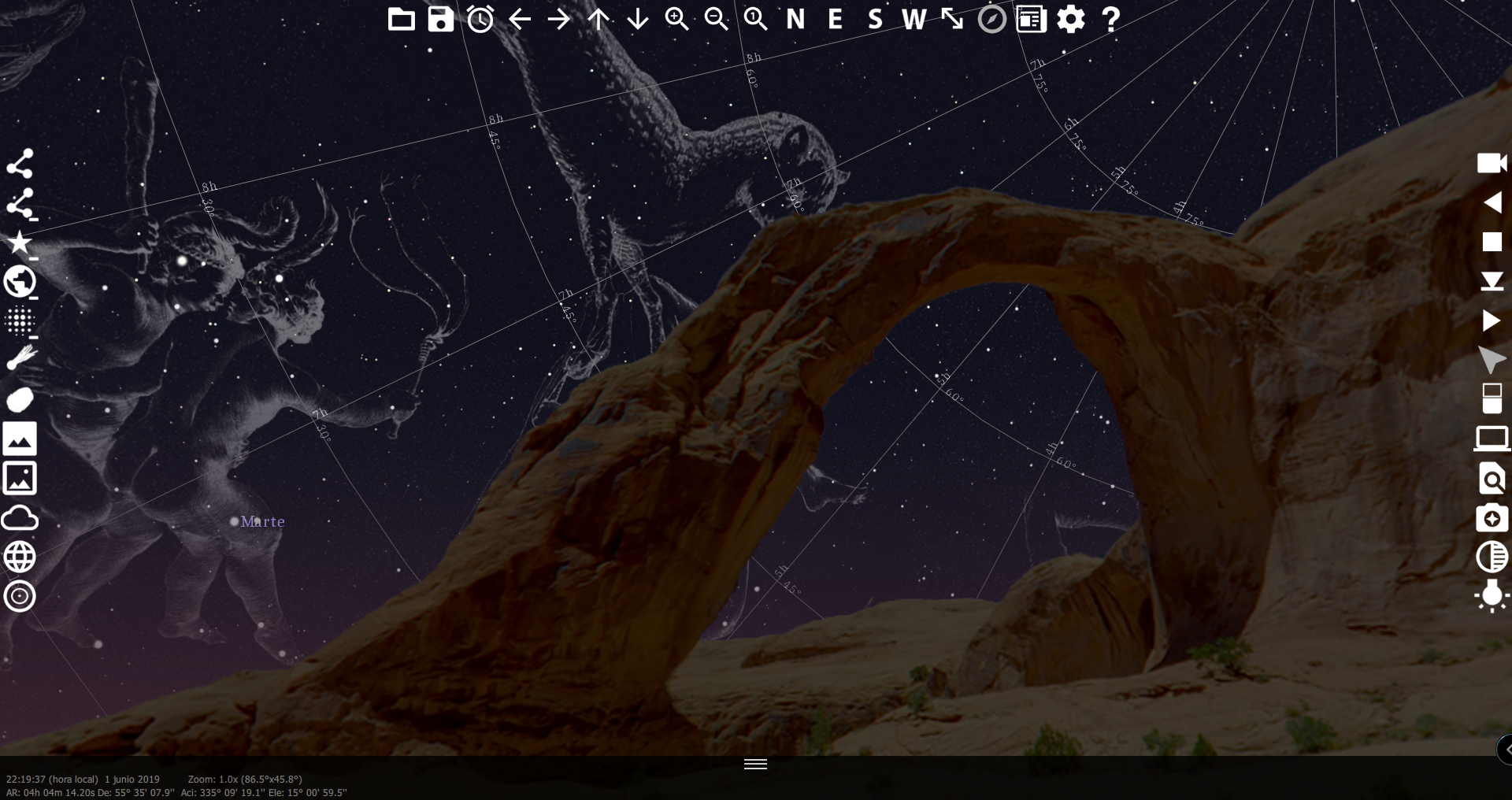