For observers in the northern hemisphere, in the morning, the comet appears low above the north-eastern horizon, below Capella. In the evening, the comet can be seen low in the north-western sky. The comet can be seen in the morning and evening because it is circumpolar from about latitude 45N. The evening view is better. On July 17, Comet NEOWISE will enter the constellation of Ursa Major, below the asterism of the Big Dipper (The Plough). (If Ursa Major was upright, it would be on the right of the Big Dipper, as of July 15th.) 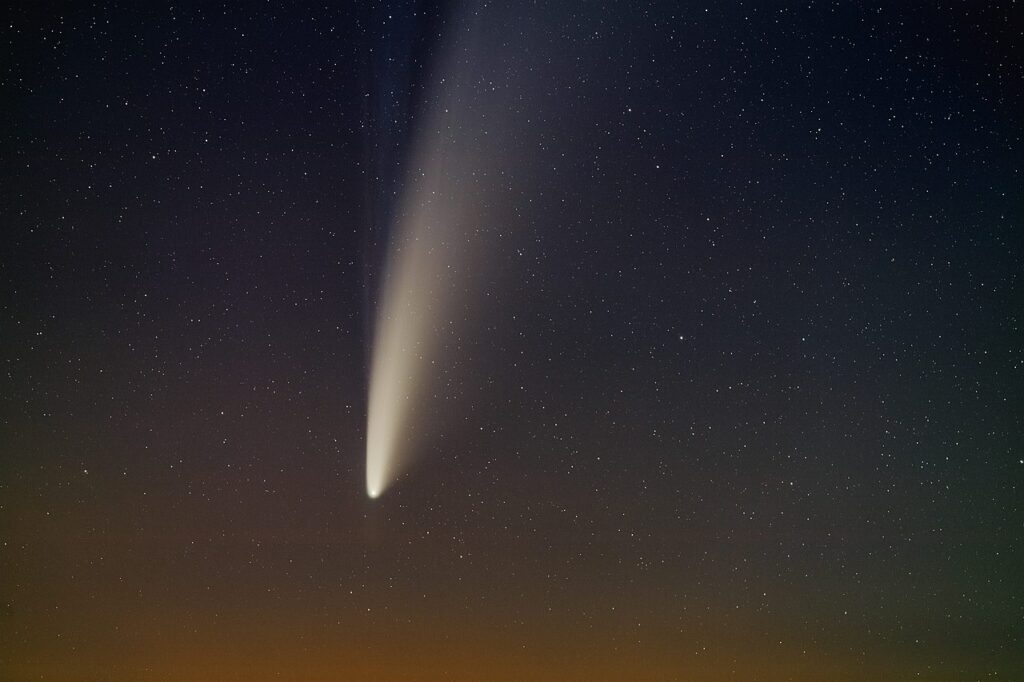 The object was discovered by a team using the NEOWISE space telescope on March 27, 2020. It was classified as a comet on March 31 and named after NEOWISE on April 1. It has the systematic designation C/2020 F3, indicating a non-periodic comet which was the third discovered in the second half of March 2020.

By early July, Comet NEOWISE had brightened to magnitude 1, far exceeding the brightness attained by previous comets, C/2020 F8 (SWAN), and C/2019 Y4 (ATLAS). By July, it also had developed a second tail. The first tail is blue and made of gas and ions;. There is also a red separation in the tail caused by high amounts of sodium. The second tail is a golden color and is made of dust, like the tail of Comet Hale–Bopp. This combination resembles comet C/2011 L4 (PANSTARRS). The comet is brighter than C/2011 L4 (PANSTARRS), but not as bright as Hale–Bopp was in 1997. According to the British Astronomical Association, the comet brightened from a magnitude of about 8 at the beginning of June to −2 in early July. This would make it brighter than Hale–Bopp. However, as it was very near to the Sun, it was reported as 0 or +1 magnitude and remained that bright for only a few days. After perihelion, the comet began to fade at about the same rate as it had previously brightened, dropping to magnitude 2.

On July 13, 2020, a sodium tail was confirmed by the Planetary Science Institute’s Input/Output facility. Sodium tails have only been observed in very bright comets like Hale–Bopp and sungrazer C/2012 S1 (ISON).

From the infrared signature Joseph Masiero estimates the diameter of the comet nucleus to be approximately 5 km (3 mi). The nucleus is similar in size to Comet Hyakutake and many short-period comets such as 2P/Encke, 7P/Pons-Winnecke, 8P/Tuttle, 14P/Wolf, and 19P/Borrelly. By July 5, NASA’s Parker Solar Probe had captured an image of the comet, from which astronomers also estimated the diameter of the comet nucleus at approximately 5 km.

To locate the comet in WinStars, use the Search dialog box and type c/2020 f3