Oumuamua is the first known interstellar object to pass through the Solar System. Formally designated 1I/2017 U1, it was discovered by Robert Weryk using the Pan-STARRS telescope at Haleakala Observatory, Hawaii, on 19 October 2017, 40 days after it passed its closest point to the Sun. When first seen, it was about 33,000,000 km (21,000,000 mi; 0.22 AU) from Earth (about 85 times as far away as the Moon), and already heading away from the Sun. Initially assumed to be a comet, it was reclassified as an asteroid a week later, and finally (6 November 2017) as the first of the new class of interstellar object.

Oumuamua is a small object, estimated to be about 230 by 35 meters (800 ft × 100 ft) in size. It has a dark red color, similar to objects in the outer Solar System. ʻOumuamua showed no signs of a comet tail despite its close approach to the Sun, and has significant elongation and rotation rate, so it is thought to be a metal-rich rock with a relatively high density. ʻOumuamua is tumbling rather than smoothly rotating, and it is moving so fast relative to the Sun that there is no chance it originated in the Solar System. It also means that ʻOumuamua cannot be captured into a solar orbit, so it will eventually leave the Solar System and resume traveling in interstellar space. ʻOumuamua’s system of origin and the amount of time it has spent traveling amongst the stars are unknown. 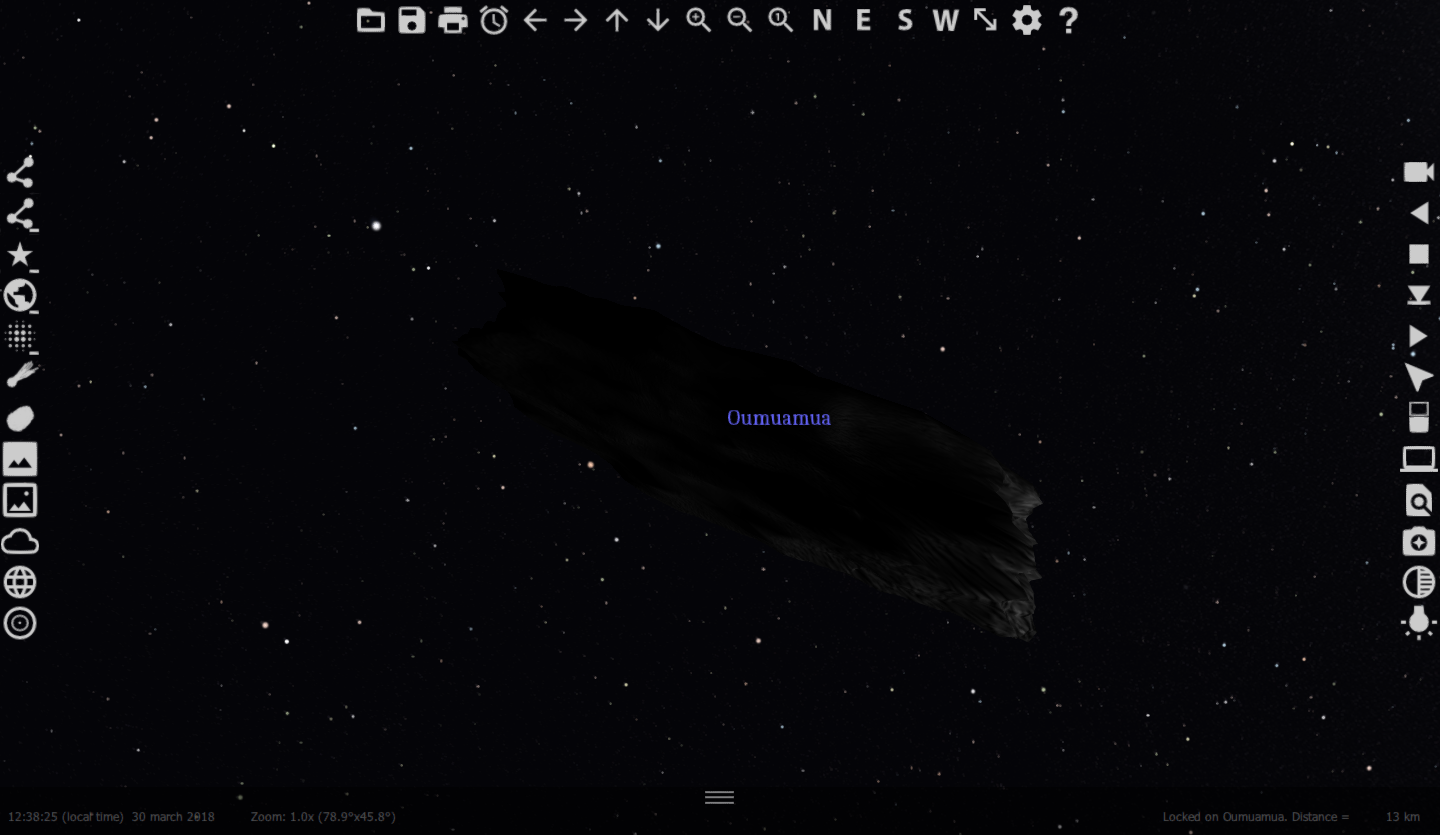 As the first known object of its type, ʻOumuamua presented a unique case for the International Astronomical Union, which assigns designations for astronomical objects. Before its true nature was known it was classified as comet C/2017 U1 and later as asteroid A/2017 U1. Once it was unambiguously identified as coming from outside the Solar System a new designation was created: I for Interstellar object. ʻOumuamua, as the first object so identified, was designated 1I, with rules on the eligibility of objects for I-numbers and the names to be assigned to these interstellar objects yet to be codified. The object may be referred to as 1I; 1I/2017 U1; 1I/ʻOumuamua; or 1I/2017 U1 (ʻOumuamua).

The name comes from Hawaiianʻoumuamua, meaning ‘scout’, (from ʻou, meaning ‘reach out for’, and mua, reduplicated for emphasis​, meaning ‘first, in advance of‘) and reflects the way this object is like a scout or messenger sent from the distant past to reach out to us. The first character is a Hawaiian ʻokina, not an apostrophe, and is represented by a single quotation mark and pronounced as a glottal stop; the name was chosen by the Pan-STARRS team in consultation with Kaʻiu Kimura and Larry Kimura of the University of Hawaii at Hilo.

Before the official name was decided upon, the name Rama was suggested, the name given to an alien spacecraft discovered under similar circumstances in the science fiction novel Rendezvous with Rama (1973) by Arthur C. Clarke.

ʻOumuamua is the first known interstellar object to visit the Solar System and it appears to come from roughly the direction of the star Vega in the constellation Lyra. The incoming direction of motion of ʻOumuamua is 6° from the solar apex (the direction of the Sun’s movement relative to local stars), which is the most likely direction for approaches from objects outside the Solar System. On 26 October, two precovery observations from the Catalina Sky Survey were found dated 14 and 17 October. A two-week observation arc had verified a strongly hyperbolic trajectory. It has a hyperbolic excess velocity (velocity at infinity) of 26.33 km/s (58,900 mph), its speed relative to the Sun when in interstellar space.

By mid November, astronomers were certain that it was an interstellar object. Based on observations spanning 34 days, ʻOumuamua’s orbital eccentricity is 1.20, the highest ever observed. An eccentricity above 1.0 means an object exceeds the Sun’s escape velocity, is not bound to the Solar System, and may escape to interstellar space. While an eccentricity slightly above 1.0 can be obtained by encounters with planets, as happened with the previous record holder C/1980 E1, ʻOumuamua’s eccentricity is so high it could not have been obtained through an encounter with any of the Sun’s planets, known or unknown. Even undiscovered planets, if any exist, could not account for ʻOumuamua’s trajectory – any undiscovered planet must be far from the Sun and hence moving slowly according to Kepler’s laws of planetary motion. Encounters with such a planet could not boost ʻOumuamua’s speed to the observed value, and therefore ʻOumuamua can only be of interstellar origin. ʻOumuamua entered the Solar System from above the plane of the ecliptic. The pull of the Sun’s gravity caused it to speed up until it reached its maximum speed of 87.71 km/s (196,200 mph) as it passed below the ecliptic on 6 September and made a sharp turn upward at its closest approach to the Sun (perihelion) on 9 September at a distance of 0.255 AU (38,100,000 km; 23,700,000 mi) from the Sun, i.e., about 17% closer than Mercury’s closest approach to the Sun. The object is now heading away from the Sun (towards Pegasus) at an angle of 66° from the direction of its approach.

On the outward leg of its journey through the Solar System, ʻOumuamua passed below the orbit of Earth on 14 October at a distance of approximately 0.1616 AU (24,180,000 km; 15,020,000 mi) from Earth, and went back above the ecliptic on 16 October and passed above the orbit of Mars on 1 November. It will pass above Jupiter’s orbit in May 2018, Saturn’s orbit in January 2019, and Neptune’s orbit in 2022. As it leaves the Solar System it will be approximately right ascension (RA) 23h51m and declination +24°45′, in Pegasus. It will continue to slow down until it reaches a speed of 26.33 km/s relative to the Sun, the same speed it had before its approach to the Solar System. It will take the object roughly 20,000 years to leave the Solar System completely.

Accounting for Vega’s proper motion, it would have taken ʻOumuamua 600,000 years to reach the Solar System from Vega. But as a nearby star, Vega was not in the same part of the sky at that time. Astronomers calculate that one hundred years ago, the asteroid was 561 AU (83.9 billion km; 52.1 billion mi) from the Sun and traveling at 26.33 km/s with respect to the Sun. This interstellar speed is very close to the mean motion of material in the Milky Way in the neighborhood of the Sun, also known as the local standard of rest (LSR), and especially close to the mean motion of a relatively close group of M dwarf stars. This velocity profile also indicates an extrasolar origin, but appears to rule out the closest dozen of stars. In fact, the strong correlation between ʻOumuamua’s velocity and the local standard of rest, might mean that it has circulated the galaxy several times and thus may have originated from an entirely different part of the Milky Way.

It is unknown how long the object has been traveling among the stars. The Solar System is likely the first star system that ʻOumuamua has closely encountered since being ejected from its birth star system, potentially several billion years ago. It has been speculated that the object may have been ejected from a stellar system in one of the local kinematic associations of young stars (Carina or Columba specifically), within a range of about 100 parsecs, some 45 million years ago. The Carina and Columba associations are now very far in the sky from the Lyra constellation, the direction from which ʻOumuamua came when it entered the Solar System. Others have speculated that it was ejected from a white dwarf system and that its volatiles were lost when its star became a red giant. About 1.3 million years ago the object may have passed within a distance of 0.16 parsecs (0.52 light-years) to the nearby star TYC 4742-1027-1, but its velocity is too high to have originated from that star system, and it probably just passed through the system’s Oort cloud at a speed of 103 km/s (230,000 mph).

According to one hypothesis, ʻOumuamua could be a fragment from a tidally disrupted planet.

If you want to view Oumuamua’s position in WinStars, please download the latest version of the program (3.0.22 beta) and activate the Oumuamua module .